Final Level: Rustpunk Rascals, and what we learned while doing it!

Final Level: Rustpunk Rascals, and what we learned while doing it!

We have been working hard on our playable for the past half a year. Now that our time here is nearing its end, we can finally tell you a bit about our project, Rustpunk Rascals. We also wanted to share some of our learnings and experiences from the Level Up program. 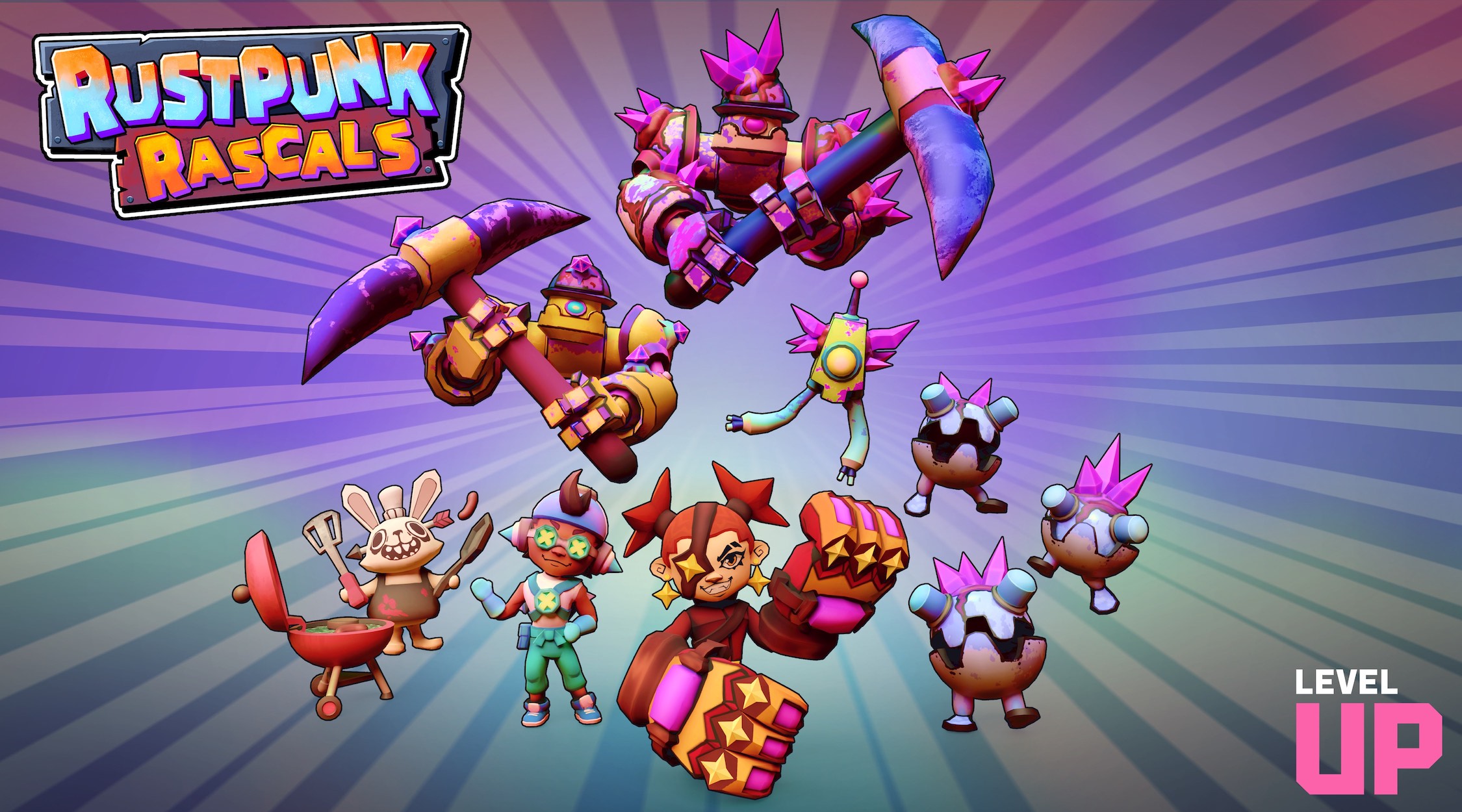 To recap, Level Up is a program where we, a team of students and recent graduates, had an opportunity to learn how to make mobile games the Supercellian way. Our goal was to create a playable internal demo within six months, as a team of our own.

We call our project Rustpunk Rascals. It is an action RPG roguelite where you play as reckless and wacky Rascals with unique skills. Rascals venture out in the dangerous wasteland to collect Glowstone, the robust material that used to be the foundation of civilization. Today, Glowstone is the source of all evil as it has corrupted all the machines in the wasteland. As a Rascal, you must use Glowstone to power up yourself and fight against the corrupted robots!

We set out to create a rewarding gameplay loop. Fighting the various robot enemies, tackling the challenges provided by the game, and boosting your characters’ abilities with powerups that are purchasable with the collected Glowstone would inspire the players to try their best again and again.

Rustpunk Rascals takes a lot of inspiration from different roguelites. There is a permadeath-mechanic where you lose all of your Glowstone-purchased abilities once you get defeated. However, the gained Golden Gear unlocks remain at your disposal forever, even after you perish in the dungeons.

The colorful comic art style with slightly crooked visuals strengthens the punk attitude of Rustpunk Rascals. To make following the action easier, we emphasized the contrast between the playable characters and enemies. It is important to keep the look cohesive, and we used bold shapes and geometric language in the game’s art.


During the development of Rustpunk Rascals, we learned a massive amount of things not only about game development but also about teamwork, scoping work, scheduling, and other essential aspects.

From the get-go, we had complete freedom and responsibility to work on the project on our terms. We had to figure out what kind of game we would like to create, set our goals, create our schedule and make sure we could stick to it. We all took responsibility for the design, and everyone had a voice in the team.

For our small team, teamwork and finding the ways of work that fit all of us was possibly the most crucial part of the project. It is very important to have a safe team space where everyone feels respected and valued. Team bonding and knowing each other well had a substantial positive impact on our development – we worked faster and were more confident about our decisions.

We did not want processes for the sake of processes. Instead, our goal was to find what worked for the team. Towards the end of the project, Rustpunk Rascals wasn’t just a concept in our heads anymore, everyone had a clear picture of what we were doing, and the pieces started to come together.

Our development process accelerated in the last weeks before the playable was released, and in June, we released the first version of Rustpunk Rascals internally at Supercell. We received some excellent feedback and were able to do some final touches to the demo with an update. The reception of the playable was good, and we felt satisfied with the end result.

We feel extra lucky to have been chosen to be part of this project. Every Supercellian who we have worked with has welcomed us with open arms. The level of freedom we have had is something that cannot be taken for granted, and we are incredibly grateful for all the support we have received along the way. We want to thank everyone who worked with us at some point, especially our closest mentors, whom we could trust to help us when we needed support.

During these six months, we have collected some significant real-world experiences in game development. These powerups will remain with us permanently, even when we continue forward on our paths to the following dungeons.